With my Fiance's reduced work hours, our Op-Shopping outings have increased.. Yay, lucky me. All this weeks Op-Shop finds have a kitchen theme.
This cute tea towel to add to the growing collection.
Two kitchen chairs. They need a bit of work, but are so comfortable. $5 each. 'Tilly' always has to get in on the photo shoots.
A colander ($2). Fairly solid and heavy as far as colanders go. Well used, and showing its age, so perfect for...
displaying my buttons.
And this Corningware dish. Perfect size for the microwave.
Posted by Zara at 6:54 pm 8 comments:

This weeks favourite is a new recipe, baked for the first time last night and enjoyed for both morning and afternoon tea today. Having picked a bag full of lemons from an old neighbours heavily fruiting tree I sought recipes to use a few in. I also had plenty of eggs in the fridge. I found this recipe for lemon and coconut brownies on taste.com.au, and they turned out very well, and are delicious with only a couple of pieces remaining. Moist and dense on the inside with the characteristically slightly crunchy top of brownies.

Very yummy with ice-cream as dessert.

﻿
These are the progress photos of one side of our vegie garden. What began with a new shovel and fork and a whole lot of hard work has resulted in a beautiful and productive area.
﻿This is how the area looked, over run with seaside daisies, onion weed, wandering dew, fern and invasive succulents.
﻿﻿﻿﻿ ﻿﻿﻿﻿ Two days of hard work later, we discovered hidden stone garden-bed edging and concrete paths. The first piece of construction was the compost bin, with recycled timber and old oyster growing trays allowing air circulation. The front timber slats lift out to remove the composted compost.

﻿﻿We then made a couple of new garden beds, and added well rotted cow poo from the dairy, planted the first lot of seeds and mulched heavily with newspaper and hay to stop the persistent onion weed. Now just to let the garden grow. ﻿ ﻿﻿﻿﻿﻿The vegies are starting to grow. Lettuces at the back. Spinach, capsicum, chilli, parsley and rosemary in the next bed. More chillies and beans in the next, then beetroot, spring onion and parsnip, closest. ﻿﻿﻿﻿﻿﻿
﻿﻿The pumpkins grew self-seeded from the compost bin, and produced several tasty meals.
﻿
﻿
Our chook tractor rotation is improving the soil, and preparing the beds for this seasons plantings.
Since the establishment of the garden we have harvested watermelon, yacon, corn, Lebanese and apple cucumbers, zucchini, snow peas, bush and climbing beans, cherry and Roma tomatoes, rocket, butternut and jap pumpkin, vegetable spaghetti, lemon grass, eggplant, capsicum, chilli, lettuce, strawberries, shallots, parsnip, beetroot, spinach and herbs including parsley, rosemary, basil, chocolate mint, coriander, garlic chives and lemon thyme.

Permaculture principles have been incorporated through planting of flowers, including nasturtiums and marigolds to attract pollinators and deter pests; and companion planting. The bird bath is a popular place with the wrens and williwag tails.

Now to get back in the garden, watering the newly planted seeds waiting for them to poke their heads above the soil; and sit for a while and enjoy listening to the chooks clucking away and delighting in a dust bath.
Posted by Zara at 8:23 pm 3 comments:

With the weather cooling down, and the nights becoming rather chilly, the search was on for woollen blankets, and we didn't come back empty handed- two singles and one queen.

This scarf ($1.50)..perfect for wearing with a snug winter jacket. I've never seen a scarf with this Picasso design before.

And these vintage buttons, two jars worth totalling $7. I like the tactile design of the white floral ones.
Posted by Zara at 12:52 pm 12 comments:

This past week has proved to be an enjoyable one, with creating and crafting a plenty. Having no uni commitments, and plenty of perfect weather to be inside out of the rain and cold, the choice of creativity was an easy one. The sewing tasks had been awaiting a while. Firstly fitting and stitching the lounge cushion cover, which had been on the list for over six months; plus mending a few clothes, nothing too exciting I know, but using the using the sewing machine is always fun.
The creativity extended to making a few greeting cards and using some of my button collection in the process. The button assortment grew further with two more jars full of vintage treasures (some of which are pictured in the new header) found during my thrifty adventures during the week.

Appreciating the beauty and diversity of nature.


As a tadpole metamorphoses into frog
Helping out nature
﻿Nature at its smallest.. skink (big, manly hand courtesy of Darron)
Happy Friday to all.
Posted by Zara at 5:35 pm No comments:

The finds include these 3 bowls, perfect for porridge on these cool mornings- minus goldilocks.
And the blue wren teatowel for 40c... one of my favourite birds.

A while between postings

Well, I'm back. Over a week with limited internet sure puts a stop to blogging. In this time I excitedly received two parcels in the mail. Oh, how I love getting letters/parcels in the mail. The first was from Linda, over at The Bohemian Juhnkee, as part of the handmade craft swap hosted by Artichoke Designs.
I received a little felt bag, which held 2 lovely handmade brooches, handmade by Linda.

My second parcel enclosed the dress I was lucky enough to win in the giveaway from Julie of Narioka﻿. Thankyou, the fabric and design are beautiful. The trees on the fabric seem to incorporate all the four seasons... so cute.

Sorry, no ironing occured here.
So although the internet wasn't cooperating, and I couldn't browse all my favourite blogs, it was made up for by receiving these beauties.﻿
Posted by Zara at 2:08 pm No comments:

Well today I had my final Uni exam. Now just to wait and hope for good results. More crafting, gardening and baking planned for the mid semester break. I can't wait.

Today's favourites are a few from the vegie garden. What beautiful and functional blooms, providing colour and attracting all those beneficial insects. 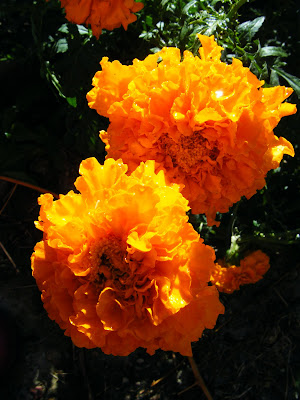 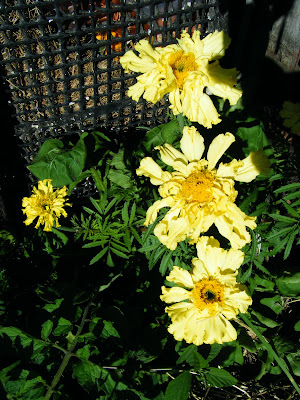 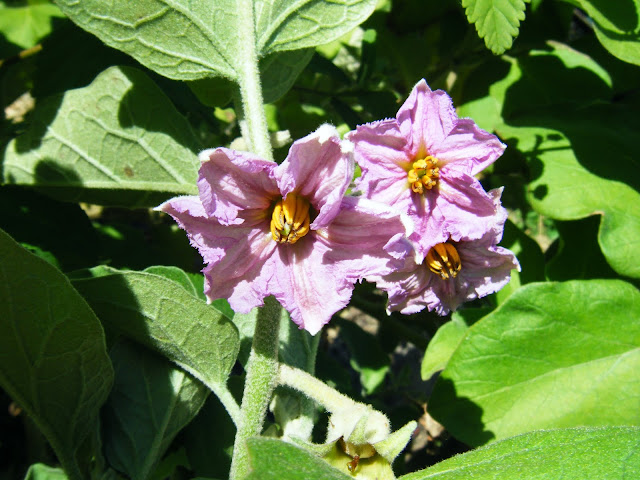 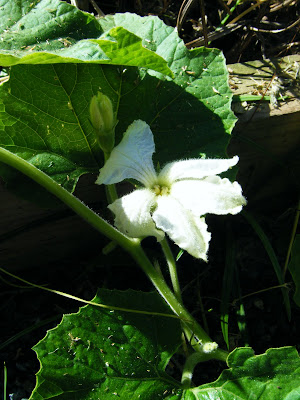 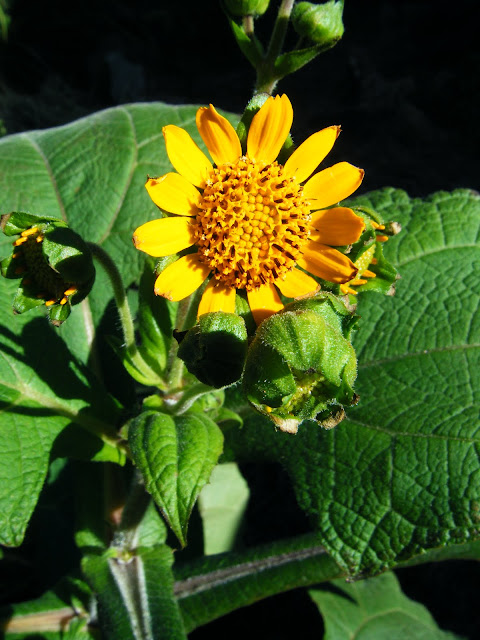 Yacon
This plant, related to the sunflower and Jerusalem artichoke produces edible tubers underground. We harvested one plant today, with about a dozen tubers. Thay taste like a cross between an apple and watermelon, with the texture of a potato.
﻿
A happy long weekend to all.
Posted by Zara at 7:56 pm 6 comments:

This weeks Op-Shopping has been a bit scarce, with an assignment due next week, and three uni exams too, I have been at home with my head in the text books.

My finds include this cute little hedgehog toothpick holder, all of 50 cents. 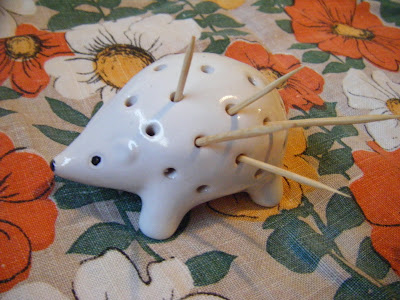 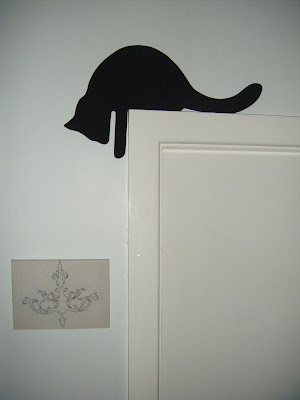 This cat silhouette was unpainted when I bought it for $1, all that was needed was a coat of black paint. It makes you look twice when you see it out the corner of your eye when entering the room. 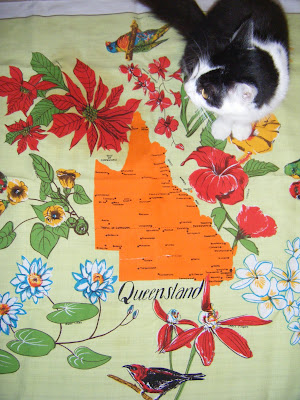 And finally this tablecloth was picked up for $2, the adorable Tilly had to get in the photo too. I now have this Queensland tablecloth to add to the WA one I got a while back... now to find the rest of the country.
Posted by Zara at 4:45 pm 6 comments: 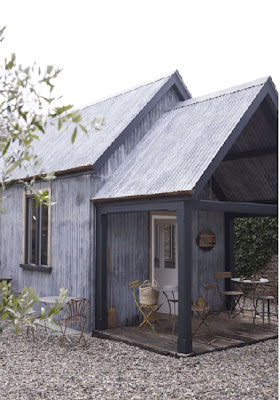 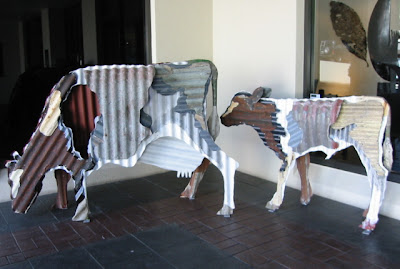 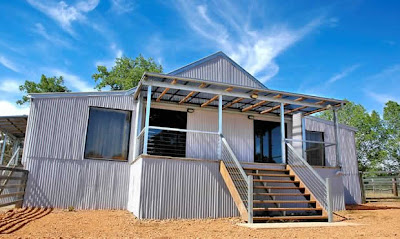 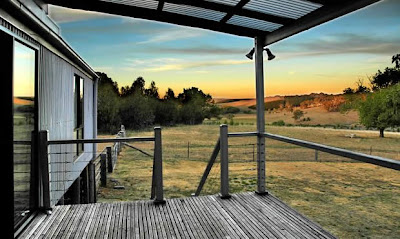 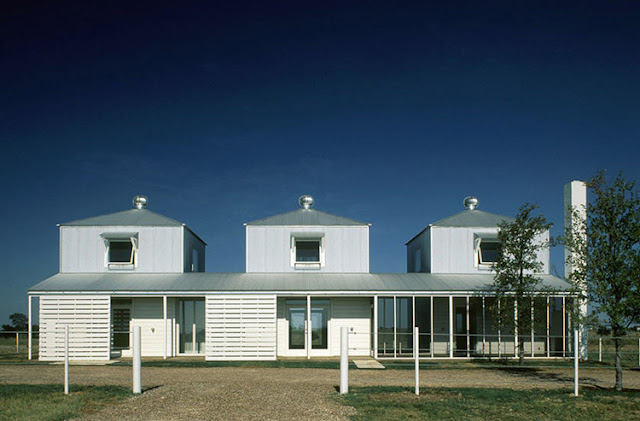 It is the perfect weather here for baking. One of our home favourites is hot apple pie, fresh out of the oven with a scoop of ice-cream... Delicious, for breakfast, lunch and dinner. 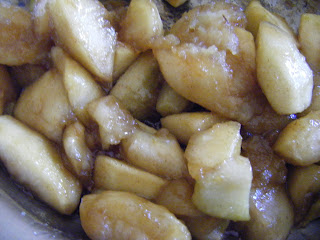 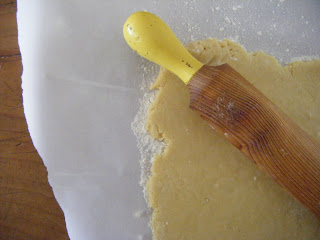 Grease pie tin. Divide mixture in half. Roll out large enough to cover base and up sides, and place in pie tin.
Place apples in, then top with rolled pastry lid. Place a couple of holes in the pastry.
Cook until golden at 200°C (about 30 minutes). 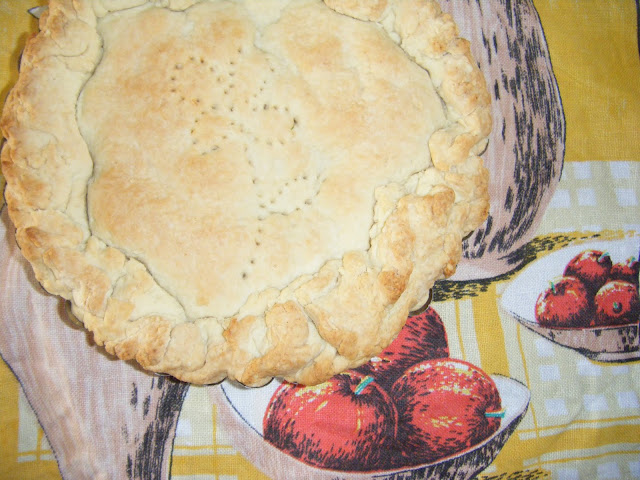 And the finished result, lasted just long enough to take this picture.
Posted by Zara at 5:31 pm 1 comment:

Zara
My love and I are living a simple life in the Southern Tablelands of NSW. I enjoy baking, crafting, sewing, op-shopping, gardening, decorating and blogging.